The benefits of yoga for young people

The benefits of yoga for young people 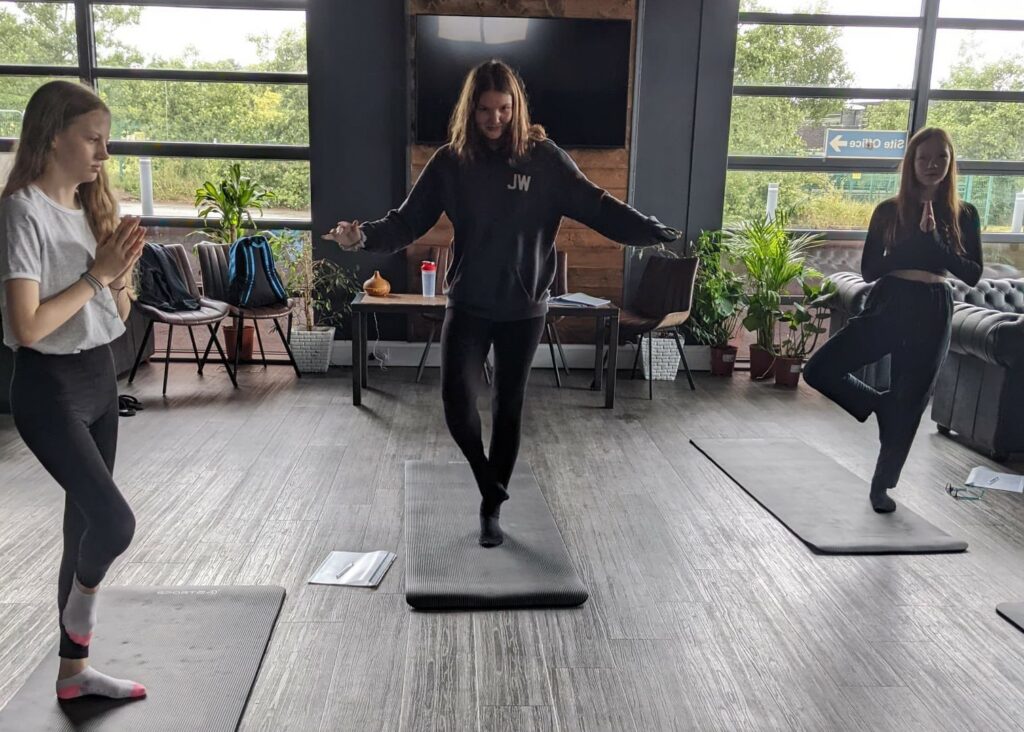 The Covid-19 pandemic has been particularly tough for children and young people. The upheaval to their lives has had a drastic impact on their mental health. A recent NHS Digital survey found that one in six children in England had a probable mental disorder in 2021 and since 2017, 39% of 6-16 year olds had experienced a deterioration in their mental health.

As our work in youth social prescribing demonstrates, StreetGames has been leading the way in helping more children and young people to improve their health and wellbeing. As part of this, we have been working in partnership with Yoginis Training Ltd to devise and deliver a 6-week programme of yoga and mindfulness aimed specifically at young people.

Yoga is widely recognised as a form of mind-body medicine, focusing on strength and mobility, and integrating mind, body and breath to boost physical and mental wellbeing. Yoga cultivates calmness and wellbeing whilst also facilitating friendliness, compassion and greater self-control. Yet despite these benefits, it is rarely an activity which is provided in community sessions for young people.

In 2020 we started upskilling the workforce on ACEs (Adverse Childhood Experiences) & Trauma Informed Practice. Many of the young people we work with have experienced multiple ACEs – with the effects of these further compounded by the pandemic which has disproportionately affected low-income and ethnic minority populations.

ACEs have been shown to cause a toxic stress response, in which the body can struggle to release itself from the “fight or flight” state. As a wellbeing activity, yoga helps the body move into the opposite state of “rest and digest”. We therefore identified a significant opportunity to maximise the benefits of yoga for this audience. When we spoke to community organisations in the StreetGames network, many had started to see the value of holistic activities like yoga, meditation and mindfulness and were interested in increasing opportunities for their young people to access them.

Initially, we delivered two pilot projects with the aim of improving wellbeing and resilience in 14–25-year-olds living in areas of deprivation. For the first pilot, we worked with Link4Life in Rochdale to engage a group of Muslim girls in their teens. We wanted to work with this group to explore their interest in a programme of this nature: was it attractive? Would they access it? How would it be perceived by a group less traditionally involved in physical activity, that had previously lacked the access and opportunity to take part in yoga?

The second pilot saw us working with Anfield Sports and Community Centre to engage a mixed gender group of teenagers in Liverpool. Here, we were keen to explore the value of yoga to a group with different levels of learning and behavioural needs.

With the success of the pilot, we were keen to expand into further locations to deliver more workforce training, allowing more facilitators and leaders to deliver the programme and ultimately enable more young people living in low-income, underserved communities to learn about yoga, boost their physical and mental wellbeing, and have the confidence to take part in yoga now and in the future.

In Spring 2021, we upskilled staff from 13 community organisations in the North West and Bradford with our Gateway to Yoga training course. Thanks to funding from Sport England’s Together Fund, each organisation was able to deliver two 8-week pilots over the following nine months, bringing the mind-body benefits of yoga to more young people living in underserved communities.

Read about the yoga programme at Junction 4 Skatepark, a community led skate park in Darwen, Lancashire and one of the organisations benefitting from our training.